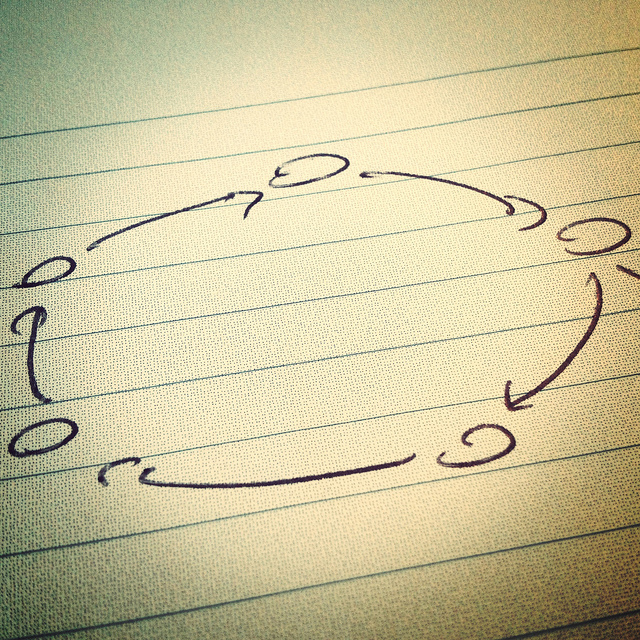 I love the challenge of creating peer-to-peer systems and the flexibility that they give us.

A well constructed peer-to-peer system allows us to create applications that work just as well with one hundred machines as they do with two, all without predetermined co-ordination or configuration; applications that don’t rely on a single machine or a specific network topology to run correctly.

With AetherStore, this is precisely what we need. We are creating a software system that eliminates the need for a storage server, instead allowing you to make use of the capacity you already have. If you have ten machines each with 1TB of free storage, AetherStore allows you to combine this capacity to create 10TB [1] of networked, shared storage, without any additional hardware.

With no shared server, we want to avoid making any one machine more important than the others, because we don’t want a single point of failure. We can’t delegate a machine to manage locks for file updates or to determine where data should be stored. Instead we need a system that is able to run without any central co-ordination, and that dynamically up-scales or down-scales as machines start up or fail.

This post discusses one of the ways in which AetherStore achieves this as a peer-to-peer system.

As we have no central server and no guarantee that any one machine will always be active, we have no way of locking out files for update — two users can update the same file at the same time and we have no way of stopping them. Instead we need to resolve the resulting conflict.

Consider the following example. When two users decide to concurrently update the same file, we have a conflict. These updates are gossiped to the other machines in the network [2], which must independently decide how to resolve the conflict and make the same decision regardless of the order in which the updates were received.

This independent evaluation of conflicts is critical to the scalability of the system and to peer-to-peer architectures in general. If each node makes the ‘correct’ decision without having to contact any other nodes, the system is able to scale without introducing any bottlenecks [3]. This is the advantage of the peer-to-peer architecture, but it is also the challenge.

In the case of AetherStore, to deterministically resolve file conflicts we can only use one of the two pieces of information available to us: the time of the file update and the identity of the machine making the update. Time is an imperfect comparison, however, because the system clocks of each machine in the network are unlikely to be synchronized. Using machine ID for comparison is even less suitable because it results in an ordering of updates entirely determined by a user’s choice of machine [4].

Both options are imperfect, but they are the only choices we have without resorting to some form of central co-ordination. Consequently, we use the time of the update — the lesser of two evils — to determine which update takes precedence, with the other, conflicting update being added into a renamed copy of the file. If each update occurred at precisely the same time, we use the machine ID as a tiebreaker [5].

The advantage of this approach is that every machine is an equal peer to every other machine. The failure of one machine doesn’t disproportionately affect the operation of the system, and we haven’t had to add a special ‘server’ machine to our architecture. Also, because each node resolves updates independently, we can easily scale out the system without fear of overloading a single machine.

Machines can be temporarily disconnected, users can take laptops home, a lab can be shut down at night, and the system remains operational [6].

Contrast this with a more traditional setup, where users are reliant on continued connectivity to a single server to have any chance of access to their data.

The key point here is that the removal of any central co-ordination greatly increases the flexibility of the system and its tolerance of failures. In AetherStore we have a system that is resilient to the failure of individual machines and one that seamlessly scales, allowing you to add or reintegrate machines into your network without configuration or downtime.

There is no central point of failure, no bottleneck, and no server maintenance.

And, for this, I love peer-to-peer systems.

[1] You probably want to keep multiple copies of this data, so the total space available may be slightly less.

[2] Rather than sending updates to all machines immediately, they are sent to random subsets of machines, eventually reaching them all. This allows us to scale.

[3] This is beautifully illustrated in Chord, which can scale to 1000’s of nodes with each node only having to know about a handful of other nodes to participate in the ring.

[5] This approach is similar to, among other things, the conflict resolution used by CouchDB.

[6] Provided we have provisioned enough copies of user data. This is the topic for another blog post.